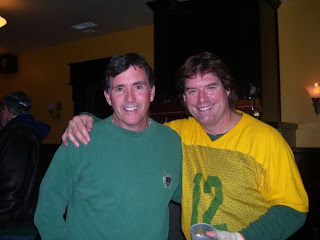 My Dad and cousin Thom March 2008
On Thursday night my second cousin Thom died from a brian tumor. He was a man full of life who practically owned the town he lived in just thirty minutes from where I grew up. He was the life of the party. A man that married for the first time a month before he died to his girlfriend of more then 10 yrs. He loved St. Patty’s day and for many St. Patrick’s days my family and I have been going to one of the bars he owned to celebrate with many other second and third cousins. He had experienced the death of his twin brother 22 years ago after he was gunned down and murdered. Thom was a model in his twenties even appearing on the front box of Corn Flakes cereal and traveling all around the world like Australia and New Zeland for photo shoots. He graduated from the same undergrad as me Western Illinois University. He then went on to law school and became an attorney.
I was way too young to remember his brother’s funeral just 2 yrs. old but I heard stories about it how his wake was on his property and they put his body atop his Corvette. Well tonight was a wake I was there to witness and one I will never forget. I must say I do not think I will ever go to a wake like that again. His casket remained closed under a huge tent on his property. There were two slide shows under the huge tent of photos of his life. His casket remained closed with images framed of his modeling years and even a man walking around with the framed box of Corn Flakes with Thom’s face on it. There were hundreds upon hundreds of people that showed up. There was even cop directing traffic that is how huge this wake was.
RIP THOM 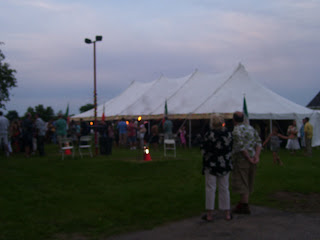 What a tribute to a life well lived but cut too short.